Russian Roly Poly (Tilting Doll, Cheburashka) a traditional Russian tumbler toy.
In contrast to the Russian Roly Poly dolls all Japanese Roly Poly do have mustache and beard, whilst the Russian Vanka-Vstanka (Tilting doll, Cheburashka) carries fairy tale stories.
Roly Poly or Vanka-Vstanka is a traditional Russian tumbler toy for generations of people since Soviet times and even during the Russian king's regime period a tilting doll was used as tumbler toy.
Many generations will remember that one of its first tumbler toys, was a Roly Poly, maybe even a Russian style Vanka-Vstanka. You find below Art Studio Melnikovitch Roly Poly art catalog listing more information on Tilting dolls history. The tilting dolls (Cheburashka) toys are all carved by hand, painted with historical children fairy tales, and covered with hard vanish. 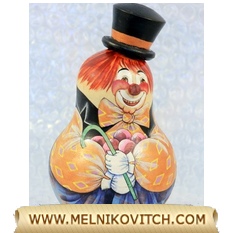 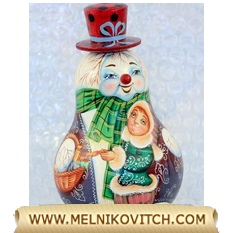 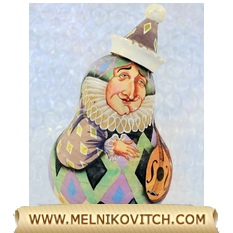 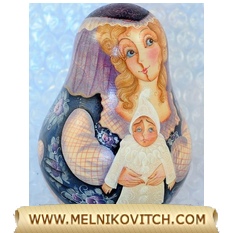 Girl with a Doll as Roly Poly (tilting doll) 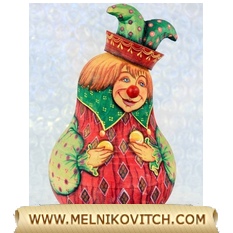 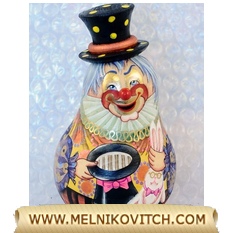 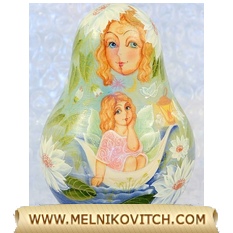 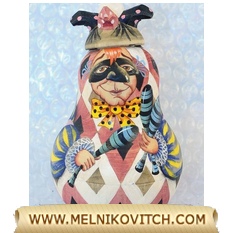 Harlequin, a character of "Comédie-Italienne"… 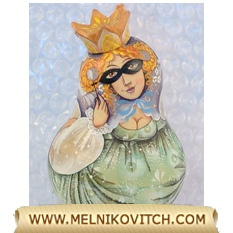 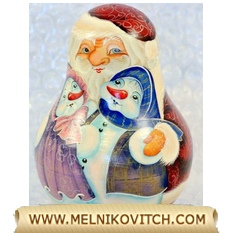 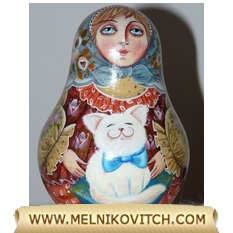 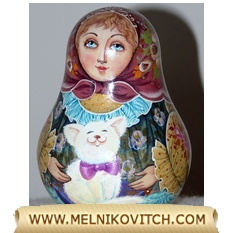 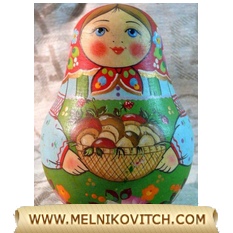 Tumbler with a basket of mushrooms, traditional… 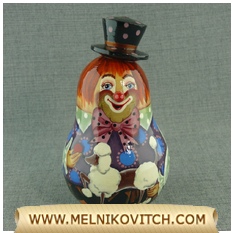 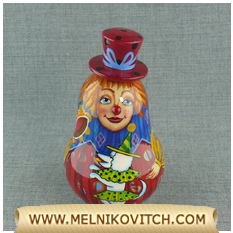 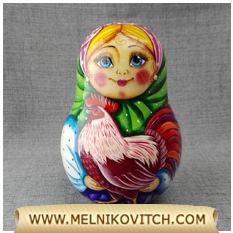 Tumbler with a cock 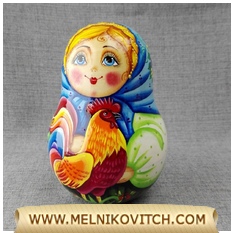 Tumbler with a blue cock

To buy a toy handmade

The history of dolls goes back centuries.

Its Prototype according to Japanese doll Daruma, having the form of a ball, the bottom of which is inserted a sinker.

Daruma is the personification of God Bodhidharma that brings good luck.

In this the ancients believed merchants from Nagasaki, and today Daruma give for the fulfillment of desires.

The Japanese dolls are not painted the eyes when the desire to make paint over one eye, and the second when the wish will come true.

From Japan, they migrated to China and from there two centuries ago appeared in Russia.

"Roly-poly doll, which, as you throw her, she gets on his feet" – the definition of this toy are given in the dictionary Dahl.

Russian toys of the 19th century could be integral and separable, they portrayed girls and boys dressed in national costumes, as well as merchants and clowns.

In 1990, the Russian dolls became world famous thanks to the world exhibition in Paris.

In the Soviet Union for their industrial production began in 1959 – we all remember the doll, consisting of two balls, with a musical mechanism, which as it would not put and not swing, you still took a vertical position.

Art Studio Melnikovitch continues the tradition of the Russian masters, vitcheva nevalyashek of lime, and covering them with hand-painted.

Traditional Russian toy made of wood handmade by our craftsmen perfect gift and will delight in bright colors and cheerful scenes hand painted.

Buy products our Studio is not only for lovers of decorative art, but also to anyone who wants to make an original gift.