Snowman figurines catalog and Snowman history. Snowman history, and children pride nowadays
Snowman came to us a long time ago, being everywhere during winter times, especially in the Christmas and New Year season. Children around the globe love its Snowman and some even cry if the sun someday is melting its friend away.
Snow fells to the ground, white wonderful fairy-tale like, cleared space and frosty breath, wrapped the home with snow glistening in the sun. Slow, pure weightless falling snowflakes, reaching the cold earth, transformed into miraculous quilt and beauty.
Winter came, and every house, magically appear wrapped up in Snowman`s grandmother`s scarves and hats from the attic cute. Seeing it, the children shouting with joy: a Snowman! Smiles and laughter gather around snowmen even before its creation. Read more about Snowman's history below our Snowman catalog. 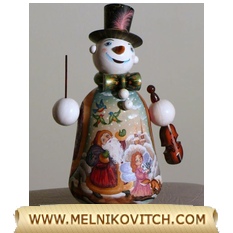 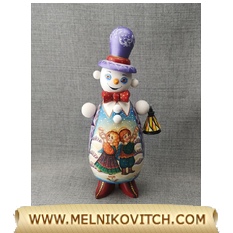 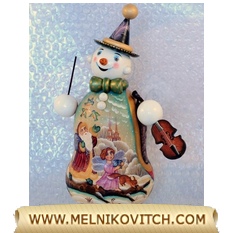 Snowman figurines with a violin as Christmas… 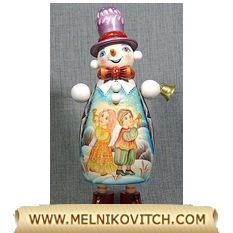 Snowman history, and children pride nowadays.
Gift package `Frosty` contains a artfully painted Snowman statuette. Now it is children`s winter play time and many elderly people know what a magic sense gave people a snowman in the past...

Ancient snowmen were like huge towering idols with a ferocious face. This image is not accidental, because the winter in those early days was tough and ruthless drifty. Since we use the phrase "reckless, " that is like a man without stove. In those old times people believed strongly that the Snowman has an angry and unfriendly nature. It was believed that special force can be received from a snowmen when the full moon was shining. In Norway, many fear looking at a snowmen in the late evening. Bad luck was to meet a snowman at nigh, it was recommended to bypass the snowman far away.

In 1493 the genius of the Renaissance, the Italian architect and sculptor Michelangelo Buonarrotti tried to use snow as a material for his sculptures. Snowman was first mentioned in books of the18th century, described as huge beautiful snowman. The word "Schneeman" came from German, meaning "Snowman. "

Snowmen are build already for a long time during Christmas and New Year seasons. They are so durable, and to be in warm countries during the winter holidays without Snowman is hard to imagine at Christmas and New Year times for children. In the Soviet period the image of a snowman as helper of Santa Claus was born. Interesting fact: European culture classifies Snowman "snowmen" as masculine, but in Russia there is a snowman and snow maiden!
After snowfall the conclusions of our ancestors that snowman are messenger of heaven, nearby to an angel, are sometimes understandable. A snowman is often seen like gift from the heaven. Fresh snow has its fashioned, seeming to come from a snow angel. A snowman comes from God, and he will give it back to God, once melted.
Our Snowman sculptures are a gift with like surprise box!

Our collection of snowman — any wooden Snowman contains caskets like baskets. You can open our Snowman and put any surprise gift in it. It will be a nice and symbolic gift sent by a snow angel with Christmas snowfall.