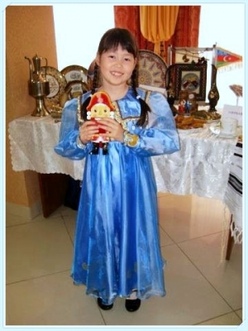 We received a letter from Galina Mukasheva (dated September 5, 2013) about how her daughters wooden Nutcracker figurine helped her to win school competition.

Thank you very much for the Nutcracker! Now it's a favorite toy of our daughter. Would like to tell our story. About two years ago, our daughter wrote a letter to Santa, and Santa fulfilled her wish, and gave her the Nutcracker at her birthday. She, like many children of course believes in miracles and fairy tales. She did not just fell in love with this toy, she decided that it has miraculous powers. Had to say, it could happen soon, or in twenty years) ) her beliving will not stop)) and this year, she is now 8 years old she still believes it. It's still her favorite toy, and my too. My daughter is very outgoing, to the school she goes as if it is a holiday and loves rhythmic gymnastics and music. And to all appearances or contests she always takes the Nutcracker with her. And WINS)) Classmates first joked about her, now they don't do it anymore. And some children, told her that they, too, still believe in miracles. I want to say thanks again!

The Nutcracker has come to… →